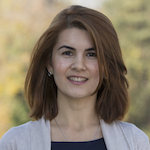 We are pleased to announce that Shirin Gurdova has been elected as the next Young ICCA Co-Chair.

Shirin welcomed the news of the election, saying "I am deeply honored to have been elected as the new Young ICCA Co-Chair! I am truly grateful to the Young ICCA community for its support and trust in me. Through this role, I will put all my energy to the service of the organization, continue its legacy, and further expand its reach to emerging jurisdictions".

Shirin will serve a two-year term as co-chair alongside Maria Athanasiou and Maanas Jain, whose terms end in January 2023 and August 2023 respectively.

Shirin will take office immediately, succeeding current co-chair Matthew Morantz who has been an asset to the Young ICCA community over the past two years. We thank Matthew for his contributions to Young ICCA and wish him the best of luck in all his future endeavours.

Interested in getting to know the new Co-Chair? View her full profile here.

ICCA is looking for a Fellow to work from its headquarters in The Hague from March 2023.

ICCA and the PCA are recruiting for the position of ICCA Deputy Executive Director.

Apply to be the next Young ICCA Co-chair