Young ICCA stands out at the 25th ICCA Congress

Young ICCA held a number of activities at the 25th ICCA Congress that took place in Edinburgh from 18 to 21 September 2022, highlighting the important work that it does in opening the doors of international arbitration.

Young ICCA Co-Chairs Maria Athanasiou and Maanas Jain, joined on stage by outgoing Co-Chair Matthew Morantz and incoming Co-Chair Shirin Gurdova, delivered the opening remarks on behalf of Young ICCA at the Welcome Ceremony on the first day of the Congress. Maria warmly greeted the audience in Gaelic and spoke about the important work the organization does for young practitioners, i.e., providing a unique platform to implement their ideas. Maria noted how Young ICCA implements the vision of its founders Marike Paulsson, Lise Bosman, and Eduardo Damiao Gonzalvez, who set up the under-40 organization in 2010 to ensure that young arbitration practitioners from all backgrounds and regions have access to international arbitration. 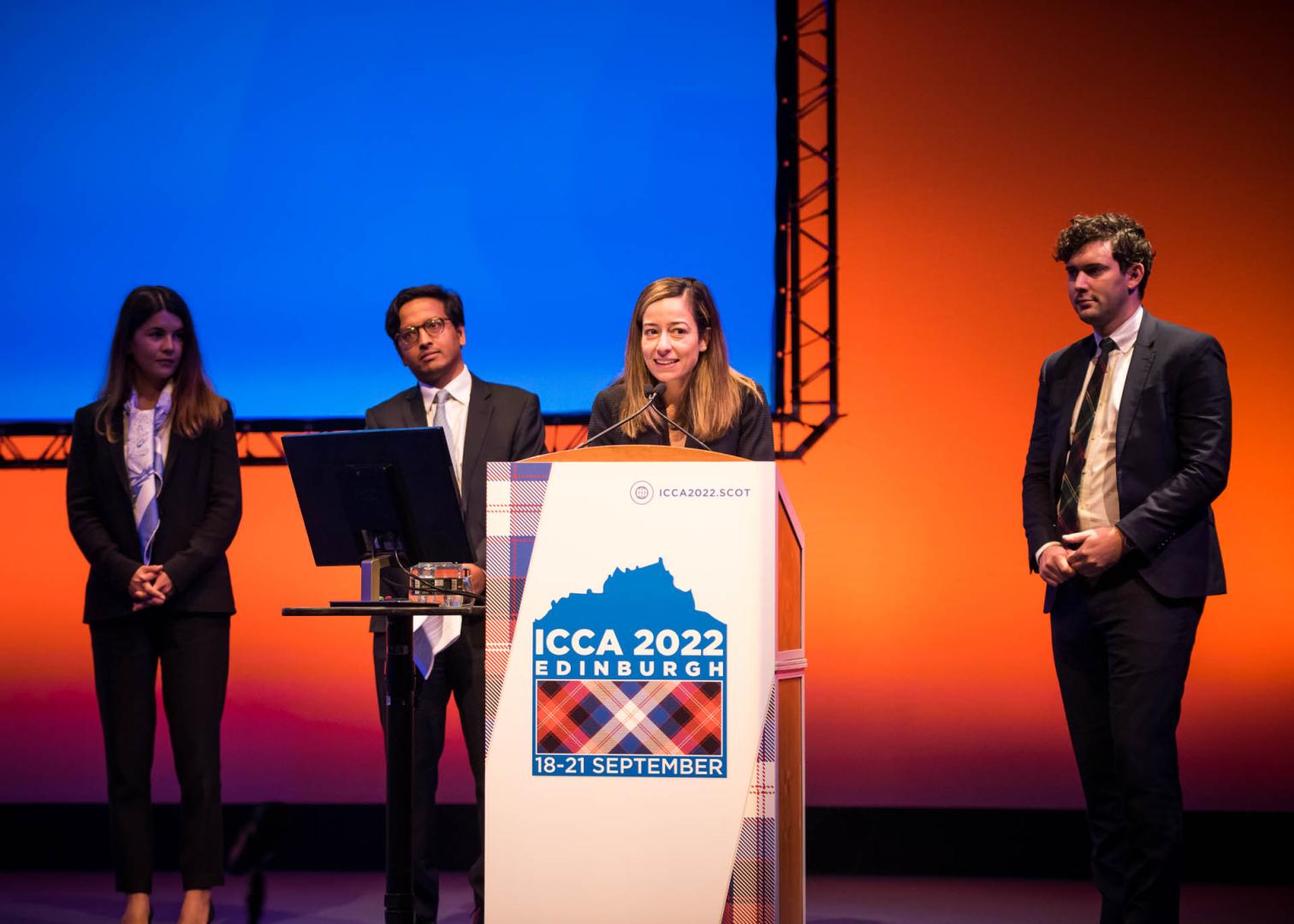 Maanas gave an overview of the growth of the organization over its 12-year history, noting that from just a few hundred members at inception, the Young ICCA membership has now grown to over 9000 members from all corners of the globe. He also gave examples of the numerous activities that Young ICCA has organized in its journey to date, including 156 of its signature skills training workshops in 85 different cities, with over 5000 Young ICCA members participating.

Maanas concluded that "this quick tour of Young ICCA’s achievements shows in concrete terms” how far the organization has come “from what started as the just kernel of an idea in the minds of a few individuals."

In addition, the winner of the inaugural Young ICCA Essay Competition, Lilit Nagapetyan spoke on the "Arbitration’s Printing Press" panel at the ICCA Congress. Her winning essay will be published in the next volume of the ICCA Congress Series. Lilit is a lawyer at CANDEY and a PhD candidate at the Queen Mary School of International Arbitration. On the panel, she took a position that confidentiality in international commercial arbitration does not undermine the legitimacy of the process. 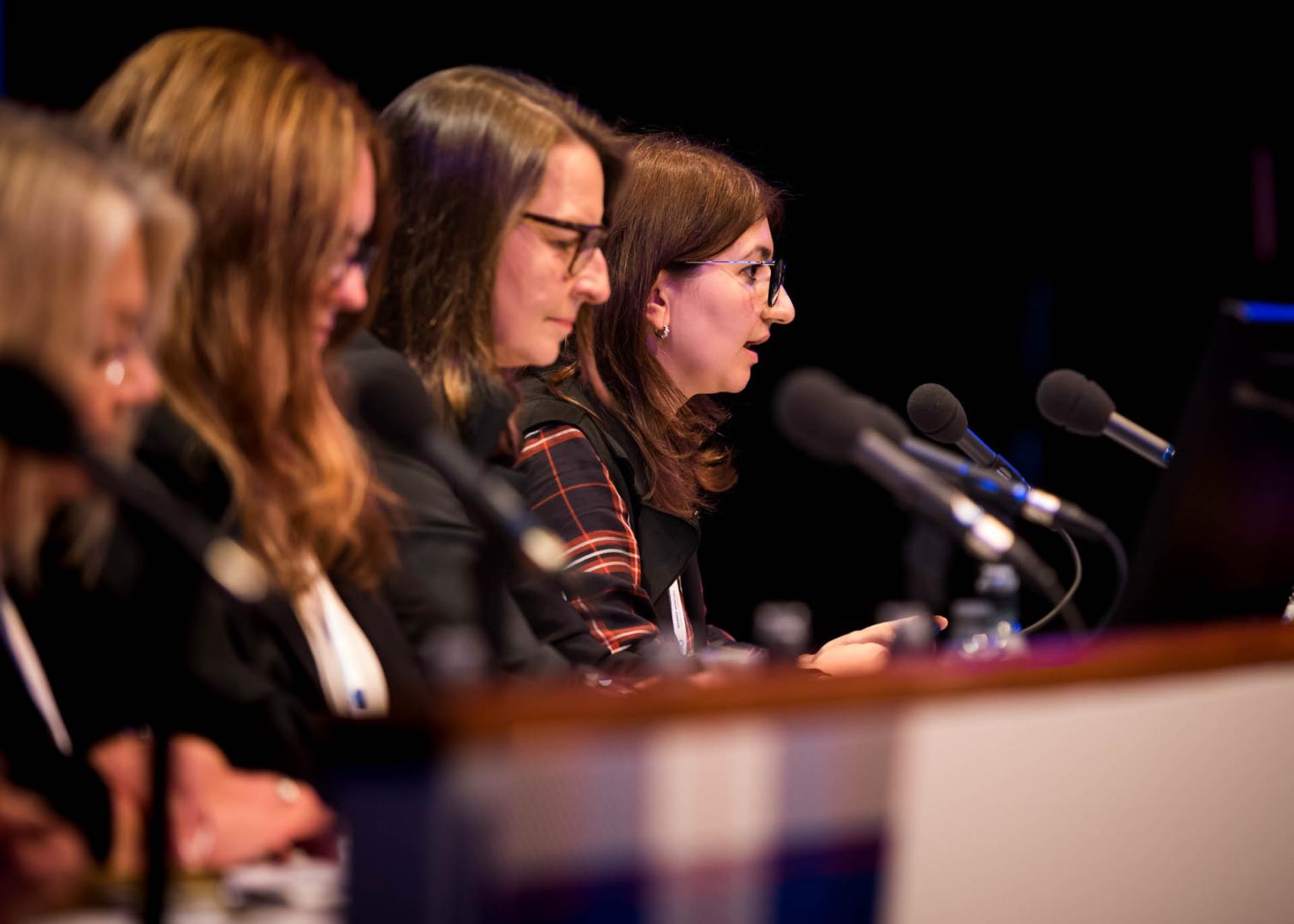 On the last day of the Congress, Young ICCA held a mentoring programme lunch where Professor Pierre Tercier addressed the mentees of the Young ICCA Mentoring Programme with a keynote speech. Prof. Tercier emphasized that the mentoring programme “allows arbitrators and other senior practitioners who have a lot of experience in the field to engage with the members of the new generation and share with them what they have themselves learnt from others over the years.”

Further, he expressed his hope that the "Mentoring Programme is a chain" and that all of the mentees "will benefit from it" and will also "return to pass on this wisdom at a later point" to the younger generations. Professor Tercier concluded his motivational speech by adding that his favourite word in life and as a teacher “has always been “sharing” and the mentoring program "is exactly that – sharing wisdom along the chain". 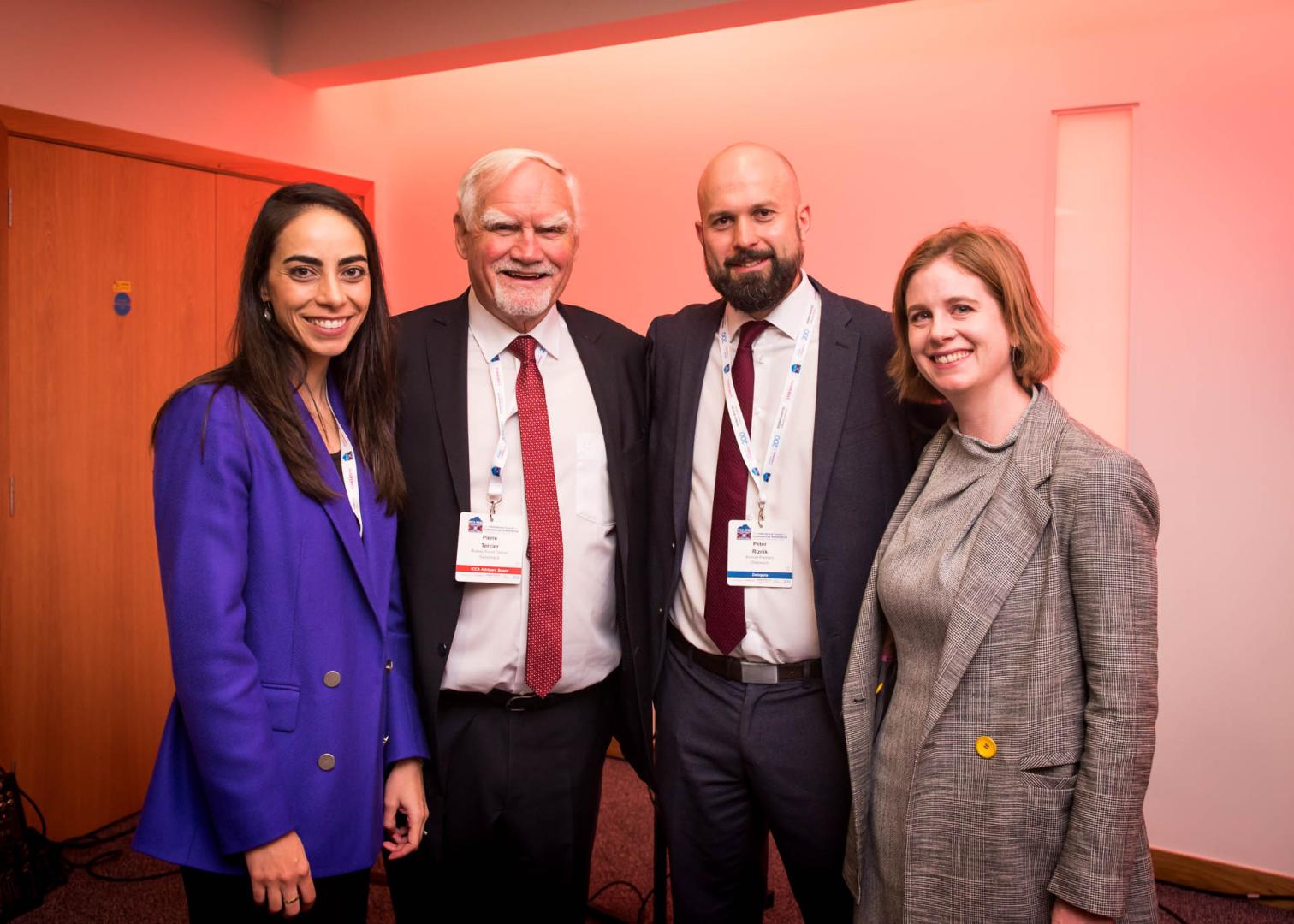 Flagship event on the last day of the Congress

Later in the afternoon, Young ICCA held its flagship event which involved a high-powered debate and an innovative arbitration shark tank segment. During the first half of the flagship event, leading arbitration practitioners participated in a debate on the following motion "The Year is 2032: the 'Old Approach' to witness evidence is no longer fit for purpose". 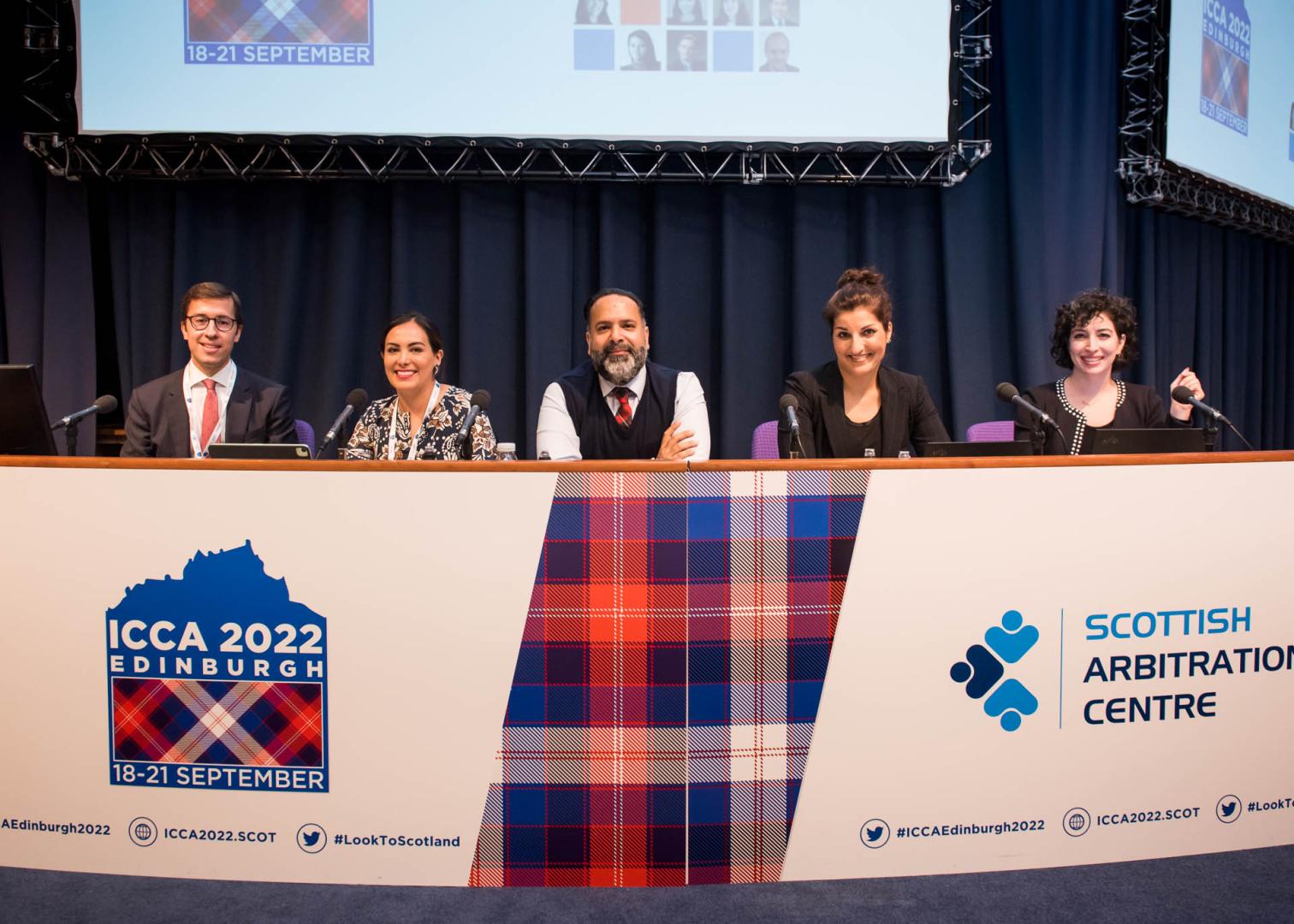 In the second part of the event, the team ran an "Arbitration Shark Tank", where five pre-selected pitchers were given up to 5 minutes each to present on what they considered to be the most significant decision in international commercial arbitration since the last ICCA Congress in Sydney. The panelists, including Kate Brown de Vejar, Partner, DLA Piper, commented on the presentations, and the audience voted for the most persuasive presentation.

The first pitcher, Jessica van der Kamp, presented the decision in a VIAC case where the appointment of Andrea Meier as the President of the Tribunal resulted in the first ever (reported) all-female arbitral tribunal. She highlighted that the decision was the most significant since ICCA 2018 Sydney, because "it marked the moment that, for the first time, the parties to an arbitration fully embraced the need for diversity amongst arbitrators and expressed their confidence in women to deliver justice".

The second pitcher, Rahul Donde, argued that the 2021 decision of the Supreme Court of India in Amazon Holdings LLC v. Future Retail Ltd "enforcing an emergency arbitration award rendered under the SIAC Arbitration Rules deserved further discussion". He submitted that the decision was significant because “it sets out a well-reasoned course for courts in other Model Law jurisdictions to follow even if their respective arbitration statutes do not expressly contemplate emergency arbitration awards".

The third presenter, Daria Shylova, presented that the Emek & WTE Group v. European Commission decision rendered by the Brussels Court of First Instance in 2021 was the most significant decision since 2018. She asserted that "the Emek ruling is a major milestone prompting further development and crystallization of institutional rules and best practices applicable to tribunal secretaries in international arbitration".

The fourth presenter, Robert Bradshaw, presented on the Swiss Federal Tribunal’s decision in Ukrnafta v. Russia case. According to Robert, the case is influential because the Hague Court of Appeal followed the reasoning of the Swiss Federal Tribunal "ruling on challenges to four other Crimean cases" and it is "a significant precedent for claimants, like the owner of the Azovstal plant in Mariupol, who have threatened claims against Russia".

Lastly, the final presenter, Vishal Aggarwal, who attended the Congress as a recipient of ICCA’s Inclusion Fund, presented on the Enka Insaat Ve Sanayi AS v. Insurance Company Chubb UK Supreme Court decision. Vishal argued that the case was the most important decision in international commercial arbitration since ICCA Congress in Sydney, because, among other things, it provided "a clear test over-interpreting arbitration clause, especially where there is no clear choice of the law governing the main contract". Vishal’s presentation was voted to be the most persuasive among the five pitchers.

The flagship event ended with a cocktail reception, giving participants and speakers a chance to network and exchange ideas.

For those who could not attend ICCA Edinburgh in person, ICCA will be making all recordings of the Congress available online in the weeks to come. View the highlights on our Edinburgh Photo Gallery, and read our coverage of the Congress on the Kluwer Arbitration Blog.

In the meantime, we look forward to the 26th ICCA Congress, which will be held in Hong Kong from 5-8 May 2024. Watch this space for more information, coming soon.

We are pleased to announce that Darejan Beridze is the recipient of the 2022 Miami Law-Young ICCA Annual Scholarship.

Young ICCA stands out at the 25th ICCA Congress

Young ICCA held a number of activities at the 25th ICCA Congress that took place in Edinburgh from 18 to 21 September 2022, highlighting the important work that it does in opening the doors of international arbitration.
View all news